Surgery went great this morning. He was back in his room by 10AM – and I’ve been busy ever since … helping him become human again (his words) Nikki and I have been trying to decipher how his ship crashed and what the little men at his feet and the creatures behind his head are doing. 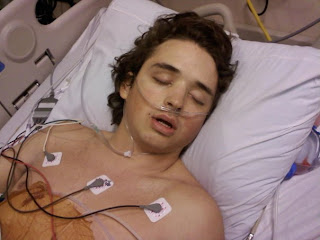 The incision was closed the whole way in surgery – praise God!! He is off the vent and sedation meds. He has a morphine drip now – hence the stories. OMG – morphine must affect him the same way it affected me. When a monitor beeps – he tells us to answer his cell phone. He is very annoyed if he hears Nikki and I laughing, so we play along with his stories, telling him we will get his car keys and a magnet for him. (and not just any magnet, it must be 5” long!)

The nurse has given him a few sips of water already – which he was very grateful for saying, “Thank you.” As long as Nikki or I are in the room, the nurse will leave the restraints off his hands. He itches is face/nose, but seems to remember that the nurse told him not to pull out the tubes, but we have to watch him closely.

Nikki and I are getting T-shirts made saying Mom and Not Mom. When the nurse first asked if he knew who we are – he looked at me saying “Mom” and at Nikki saying “Not Mom.” But he knows her name, because a minute later when she turned away from the bed laughing, he said, “Nikki – seriously!” He also wanted her to sit on the bed near him.

He’s sleeping at the moment – I think it will be a day of sleeping and stories 🙂  The nurse said he should improve fairly quickly now – maybe some food later today. Out of bed tomorrow and out of ICU soon after that.
Thank you God!

10 thoughts on “Thursday Update on Joseph”