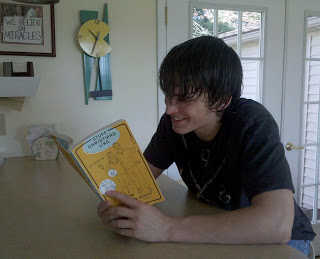 April 6, 2010 Janet 2 Comments
I’m back with a post a day earlier than planned because a few weeks ago, I signed up to be a guest at a party to discuss American Idol with Stuff Christians Like and today’s the day for that.
If you’ve come here via Stuff Christians Like – welcome!
If you haven’t heard about the blog called Stuff Christians Like – you’ve been missing a great source of laughter. Here’s some info about it …
The site is written by Jonathan Acuff, a preacher’s kid/copywriter who lives in Atlanta with his wife and two kids. Started on March 21, 2008 as a reaction to the wildly popular blog Stuff White People Like which was created by Christian Lander, Stuff Christians Like is a blog about the funny things we Christians do. And what they just might reveal about our faith.
The blog has now birthed a book by the same name, which was released recently. When my Amazon order with the “Stuff Christians Like” book came recently, the cover attracted the attention of my seventeen year old. He confiscated the book for the next hour or two and could not stop laughing.

And the next day, my two college sons discovered the book and were busting a gut (seriously bad pun – because the son without the shirt has a scar on his abdomen from seriously busting a gut this winter) 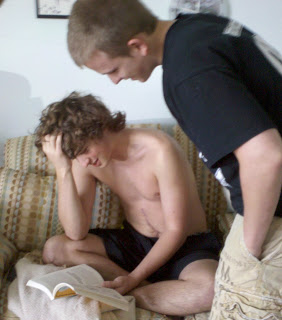 About 130 bloggers signed up for this massive Guest Post-a-thon today to answer this question:

“Is that contestant on American Idol a Christian Scorecard”
Each of the bloggers received one line from the massive scorecard – here’s the one I was sent:
5. The contestant is a missionary kid and his dad is in the audience with a machete and some sort of woven leather accoutrements = + 2 points
To add up your score with over a 130 other ideas on this scorecard, visit stuffchristianslike.net.