A strained muscle on the inside of my knee – ugh. According to my chiropractor that’s what is going on with my right knee. As he was telling me the care for it – my memory slowly came alive and I remembered that I dealt with an injury like this 15 years ago – the first time I started running. Why didn’t I remember that sooner, than I won’t have run downhill so fast, so soon?!

Yes, it’s probably caused by running downhill.
Running uphill puts tremendous strain on my left calf, so I’ve been talking it easy going up hills, because I didn’t want to injure that compromised area. I slowly jog on slight upgrades and walk any major hill. But downhill, that’s another story – it doesn’t pull on my left calf at all, so after feeling wimpy when going up hills – running downhill helps me feel powerful again 🙂 I can feel the wind in my face and (almost) forget about my injured body.
Well, apparently I was forgetting too many things when I ran down hills – forgetting that MANY knee problems arise from beginning runners going down hills too fast! It’s not really a knee issue – it’s that the muscles around the knee aren’t strong enough yet and they get pulled/strained from the force of running downhill.
To avoid knee injuries when running downhill, I should have taken tiny steps and not increased your speed. I did the exact opposite a few times – I increased my speed (it made me feel strong!) and I took longer strides (I don’t know why)

So now what – walking is okay, no running until the pain subsides, hopefully only about 2 weeks or so. Also gentle stretching throughout the day helps it heal. A strained muscle wants to contract all the time – but if you walk and/or bend it when it is contracted it only irritates it more. So I need to stretch it gently first thing in the morning and anytime I’ve been sitting for awhile so it moves without straining itself more. Ice for 20 minutes after stretching is good for it and anti-inflammatory meds as needed.

I’m disappointed with this interruption in my training – but yet with this body of mine, I’m glad its only a strained muscle. Strained muscles do heal. In June, 1994 I was a brand-new runner and I strained a muscle beside my knee (don’t remember if it was the left or right one) because I was running downhill too fast too soon. I now remember for it to heal – I quit running for a week or so. Then I slowly started running again – I would jog out the road until it hurt, then I would stop and walk home. Slowly the pain was gone and I was able to increase my running. In the 10 years that I ran (1994-2004) it never bothered me again.

No wait, this is the one … very gently! 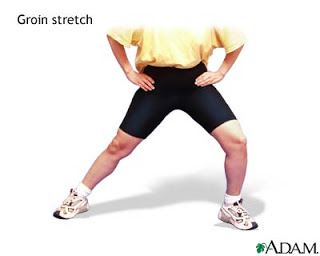