On Saturdays, I post a portion of my stories from the once-in-a-lifetime roadtrip we took in 2003 and 2004. I’m working towards writing/publishing a book in the future that would include these stories, plus more.

I’m not sure we would ever have left Heaven on earth (the Florida Keys) if we had not planned on meeting my parents in Sarasota towards the end of January, where they spend a few weeks every winter. I wanted to spend some time at the beach with my mom and sister, but the weather was cool and cloudy during our stay there. After a few days of hanging around my parent’s house, we started making plans to hit the road again.
“Mom, check this out!” Joseph called, interrupting my reading. “It’s the largest paintball field in Florida. Can we go to it?”
Joshua and Joseph had been avid paintball players for a few years. Paintball guns are small and easily fit in the storage areas under the motorhome, so the boys made sure they were packed and they wanted to find a field to play at in every state.
“When can we go? It’s in Ocala, is that near here?” His questions came so fast, I didn’t even try to answer right away.
When he finally slowed down to take a breath, I said, “When you’re done searching, give me the laptop, then I’ll figure out if we can do it.”
“Here,” he said, dumping the laptop on me. “I know this is the paintball field I want to go to in Florida. Wayne’s World – it’s the biggest and the best! There’s no other one like it. Can we go today?”

“Slow down, buddy. You’re going to hyperventilate soon.” Taking the laptop, I found directions and realized Ocala was not too far off our planned route.  Actually, I used “planned route” loosely, we really didn’t have a planned route, just a general idea of where we wanted to go, so why not Ocala?

We left my parents and headed towards Wayne’s World with a few excited boys. A few hours later, we arrived at the “biggest, baddest paintball field.” It had a large grass area nearby suitable to park the motorhome for the day. Joshua and Joseph were thrilled with the size of the field (huge) and the number of people to play with (about 50). They played from 9 to 4.
Jonathan and I went to the closest mall and Jerry hung out, watched them and took a nap or two. He also tried out his new toy – a remote-controlled airplane. He didn’t have a hobby in the last decade, due to lack of time and money. He always had interest in remote-controlled airplanes and when we came across a model shop a few days earlier, he finally gave in and bought himself one. It was about 5′ long with a 5′ wing span. We settled the ‘where will we store it issue’ by strapping it to the ceiling of the motorhome above our bed.

Life settled into a comfortable routine with us looking at the map and the weather forecast to determine where we would go the next week. We loved having a different part of the United States as our backyard to explore each week. We stopped at each state’s information center and gathered brochures, along with exploring the internet. I encouraged the boys to find something in each state that interested them and then we choose the best route/plan for that state from everyone’s options.

Jerry and I loved the rest and restoration of this lifestyle, compared to being business owners. and managers. It was interesting how each day did fill itself. Jerry had cleaner hands than ever – from the dishes he washed. Motorhomes come with many of the frills of home, but not dishwashers and we agreed since I did most of the cooking, he would clean up. Between grocery shopping, cooking, cleaning (yes, motorhomes get dirty also) and helping the boys with schoolwork, I don’t know how I ever had time to run a business. Jerry also had on-going maintenance to do on the motorhome. It was a 1995 vehicle, containing a house, so there were always a few odds and ends that needed his attention. He enjoys hands-on work, especially in this scenario, where he had the time to fix or update what’s needed it.
We sampled all types of campgrounds, ranging from regular mobile home parks with an overgrown site or two in the back to ‘resorts’ where the entrance, landscaping and pool with hot tub rivaled 5-star hotels’ amenities. We also ‘camped’ in Wal-mart parking lots about once a week en-route to our next destination. Smart move on Wal-mart’s part to allow RV’s to stay free in the parking lot for a night or two – we never left without spending at least $100 for food and supplies.
We ate at restaurants a few times a week, but most of the time we cooked in the motorhome. There were a few adjustments, as all changes in life have, but nothing we couldn’t handle with sunshine and a few days at the beach. 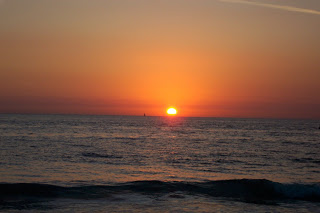 (gosh, I would love to do that trip again!)