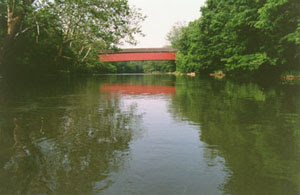 Loving our February weather right now! Over the weekend, we’ve had temps near or in the 50’s both days! On Saturday I ran around the Berks County Heritage Center. The trail along the river was still too slushy/muddy, so I ran loops through this bridge, the parking lot and the driveway. The drive into the Heritage Center off Route 183 has a giant hill. I walked up the hill to warm up, passing a man running down. Later running down the hill, I pass him running up again – he stops to chat, saying his run consisted of running the driveway from one end to the other 3 times equaling 4 miles.
“Good for you,” I encouragingly said.
“You can do it too,” He replied.
“No, I can’t – not at this time, I’m just getting back into running after injuries,” I said, as I prepared to begin running again. I don’t like to be interrupted in the middle of a workout. I was planning to run a minute longer in this workout (6 min runs/1 min walk – 4 times) and I just wanted to keep going!
He continued to tell me I could do it and that I was just using my injuries as an excuse. I smiled sweetly while saying, “Enjoy the rest of your run” and began my run again.

Finishing the last 6 minutes of running, I looped the parking lot and guess who was getting in his truck? Yes, the encouragement to run the hill continued. “Come on, you are young (flattery!) you can do it, I know you can. If an old guy like I can (now he’s looking for a compliment) you surely can. What kind of runner are you if you won’t even do the hill?!”

“A few years ago, I could have done the hill,” I inform him. “But as I mentioned, I’m just getting back into running.”
“Yea, yea, whatever – just excuses,” he says.

“I have a rod in my right femur,” is my next attempt to make this guy go away and allow me to finish my run.
“So, I do too – I had injuries also and I do the hill!” He declares.

So now I try some flattery to end this conversation, “Well, good for you, injuries and you can do the hill 3 times, that’s great.”
I attempt to ‘run away’ but again, I hear, “Come on, no more excuses, go run the hill, you can do it!”
I turn back to him, lift my left pant leg and quietly say, “And I have this.”

For some reason, he had to leave suddenly!

(But in his defense, before he left – he did tell me that I’m doing a good job running with the injuries I have.)