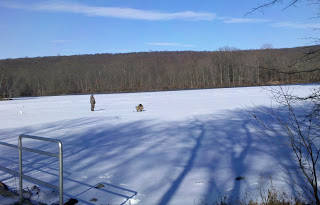 January 11, 2010 Janet 5 Comments
I think I was born saying “Why?” As a child, I wanted to know about everything. Then for a time, I stuffed (or tried to) that impulse – because “it’s wrong to question everything.” Thankfully, I realized questions aren’t wrong – not being true to the way my creator made me is probably more harmful.
So today is a ‘Question’ post. I plan to do these every week. Sometimes the question will have more depth than others – depends what stirs my curiosity at the time.
Yesterday the sun was bright, but the temps never made it up to 30F degrees – they’ve been stuck in the 20’s for the past week or two. I decided to go for a walk – figured if you can’t beat it, why not join it? I walked around the lake at a local state park.

Half of it was frozen.

Half it was not frozen.
I was amazed at two things – the people braving the ice when half of the lake was not frozen and the birds braving the water when there was ice on half of it.
The people I won’t even try to figure out …
As I watched the ducks and geese, I was amazed how they could do that without freezing to death. They just flew or swam out there without having to put on anything to survive.
Before I ventured out into this tundra, I had to put on multiple layers to stay warm and survive.
The ducks and geese naturally grow feathers needed to stay warm to live in this area, as do animals and other birds all over the planet. They have natural resources to survive the climate they live it. So applying that logic, it looks like I (and all people) should live in southern climates, where I can stay warm without needing to put on half a clothing store before venturing out.
And it made me wonder something about God and creation …
We’ve all heard (and probably said0 how great it is that God made the animals with certain things to survive in the environments he placed them in. Fish have gills, birds have wings, ducks have feathers and on and on it goes.
So my question is … why would a creator make half of his world an environment that his masterpiece creation cannot survive in naturally, but instead need all kinds of adaptions from houses to heaters to clothes simply to survive?

5 thoughts on “Question: Why – Ducks and Coats?”