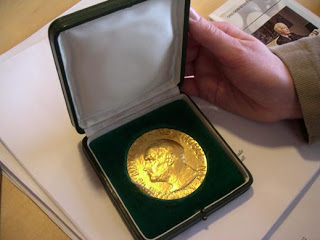 “for his extraordinary efforts to strengthen international diplomacy

and cooperation between peoples”

Most of us were surprised to wake up to this news today. I stand fairly alone in my family and circle of friends (actually even in my own house) when I say anything good about President Obama, so I tend not to say much, but today is different – I’m going to voice my thoughts on this.

I don’t think Obama is Jesus (or a ‘savior’) but I also don’t think he is the anti-Christ. I find President Obama to be like other people in the world – whether they are people I know well or not. I agree with some of what they say/do, but can’t believe some other things they say/do.

One example, I am not an animal person – sorry, just am not. Doesn’t make me a mean person or a serial killer, I just don’t like them too close to me and especially don’t want one licking my face (dog, cat or anything else) I am not mean to them and don’t like if anyone else is either, but in my perfect world, animals would all be in the wild, on a farm or in a zoo. And I have great friends that I agree with on many things. These are good people, wise people – who have good hygiene, but they have a dog and/or cat in the house – hello, what’s up with that? (sorry friends, love you anyhow;)

That’s how I feel about President Obama – I agree with some of what he says and does, but not everything. I don’t cry easily, but I cried when he was elected. I was moved by the major step it was for him, his family and our country. I’ve been thrilled with some of the decisions he’s made and sad with some others. But mostly I wait … I wait to see what the next few years hold. I give him the benefit of the doubt at this time on his many initiatives, plans and programs. Good things take time.

Which is why I’m surprised he was given the Nobel Peace Prize. The Nobel Prize own website says, “Every year since 1901 the Nobel Prize has been awarded for achievements in physics, chemistry, physiology or medicine, literature and for peace.”

That sounds like it should be given for achievements already done, not in the process. He’s taken some major steps in bringing people together and promoting peace – but he’s not even in the middle of his presidency yet! I think it is a premature award and I hope it doesn’t take time and energy away from the work he needs to do.

And I hope that someday he will accomplish many of his goals and then his prize will be even better than a medal – it will be the fact that more people live in peace because of his achievements.

Should he or shouldn’t he have won the Nobel Peace Prize?