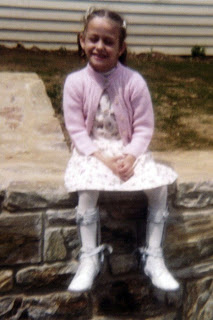 October 16, 2009 Janet 4 Comments
I have a vague memory of when I was almost four. Not many memories, just one day. A day when I was trying to understand what my older sisters were so excited about. There’s going to be another one of us – what did they mean?
“That’s why Mom has been gone all day,” one of them said, being older and wiser, they knew things I didn’t.
“She’s at the hospital getting a new baby!” (that’s how things were explained in that day)
A baby? That surprised me. I had one brother and three sisters and it never dawned on me that would change.
Everyone was excited and talked at once.
“They’ll be home tonight.”
“It’s a girl!”
“What’s her name?”
“Mom hasn’t quite decided yet – either Thelma, Laura or Rosene.”
My memory of that day ends there – I don’t remember Mom and the baby coming home, just remember the excitement when we found out we had a baby sister.
That baby sister became a woman who taught me many things over the years. Rosene was the name chosen for her and it suited her perfectly. Her smile was as bright as a rose, even when life was hard.
She liked her name and she liked roses. She was impressed with the fact that roses bloomed and were fragrant, even if life gave them thorns and her goal was to do the same.
Her motto was “Bloom where you are planted.”
And she did – even though her life was hard.
During Rosene’s first year, my parents and doctors discovered that she would have physical challenges from a lack of muscle coordination over her whole body caused by Cerebral Palsy.*
Along with sweet smelling baby lotion and cute pink dresses, life now included many other things.
Though my family lived a somewhat sheltered life as traditional Mennonites, that didn’t stop my parents from seeking out doctors and options to help her as much as possible. Over the years, this involved many things, including leg braces, surgery, custom strollers, daily therapy and exercises. Though she fell more than other toddlers, she learned to walk when fifteen months old. She had no mental challenges, so she learned to talk when others do, but her speech was slurred.

With time, it was also determined that she had severely impaired vision. (a separate issue from the CP) A surgery corrected her crossed-eyes, but nothing could be done to improve her vision. Even with all the challenges limiting her, she worked hard and was determined to do things herself. The clear, bright function of her mind was noticed by her teachers and anyone that took time to talk to her.
Though her walking was unsteady and she almost always had bruises on her knees from falling, she wanted to walk for most activities. When she fell, she would pick herself back up and keep going. 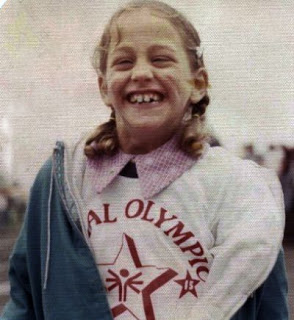 Life for Rosene started to decline physically in her late twenties and she began to use a wheelchair regularly. But she was always learning and stretching herself mentally and she learned to use a computer. A mouse wasn’t an option with her impaired vision and unsteady hands, so she memorized how often to click the correct arrow key to get to the right place. She had a talking software program, that she affectionately named Curtis, that said each letter as she typed it. Since verbal communication was a challenge, the computer gave her a place to express her feelings and emotions and a tool to communicate her thoughts about God and life. She created cards and wrote poems and sayings.
God didn’t promise that life would be fair.
Only that He would be there to care! 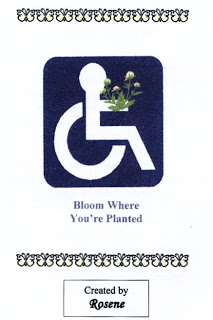 During 2008, Rosene’s health declined when she began having excruciating pain in her feet, hands and arms. On October 16, 2008 Rosene had surgery to stabilize the vertebrates that were pinching nerves and causing the pain. Five days later on October 22, she passed on to be with Jesus.
I’ll be posting some of her writings over the next week in memory of
a rose that bloomed brightly where she was planted. 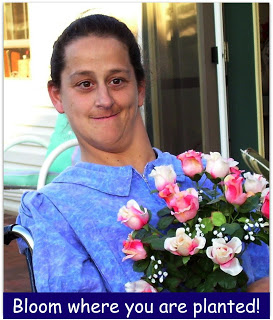 Here’s the other posts I wrote about Rosene …

*Cerebral Palsy (CP) is an umbrella term that encompasses a group of non-progressive, non-contagious conditions that cause physical challenges in human development. CP mostly affects body movement and muscle coordination. There is no known cure for CP.

4 thoughts on “My Sister Rosene – Bloom Where You Are Planted”