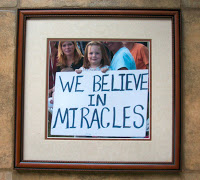 My thoughts were much more than the excited thoughts of a couch potato getting off her duff and putting one foot in front of the other. Words from doctors were swirling in my mind;
“Your leg might need to be amputated. Even if it’s saved, don’t expect to walk on it”
“You need to think of running as part of your ‘pre-accident’ life – it won’t be a part of your future.”
With each step, I assessed the aches and pains coming from the lower half of my body. My legs were supporting me, though my nerves were complaining – some stabbing knife pain, along with areas of rubbery numbness. (Like when your arm is sleeping)

I also thought of the words my husband Jerry heard from doctors, as I lay unconscious in the hospital …
“There’s only a fifty/fifty chance your wife will live.
“She might have brain damage and/or injuries so that could prevent her from walking again.”
Now four years after the accident, I am not only walking, but running on my own two feet. I can only run a few minutes at a time, but I can run! I’m so thankful for healing.
Sign at my ‘homecoming’ 4 yrs ago
Here’s the story of the past 4 years –

If I had a choice, I would like to skip the pain of the past few years, but I don’t have that choice. The choice I have is this life today. What do I do with the life given to me each day? A few things – tell how physical and emotional healing can happen and go for a run!