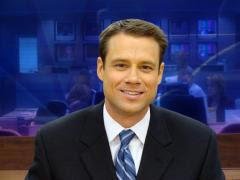 March 28, 2009 Janet Leave a comment
Linda Wingard, Loretta Parson, Carolyn Stoltzfus, Deborah Kurtz, Bev Shantz, Joseph and I were at Garden Spot Village to be interview and filmed while running on Friday morning with Jere Gish and Rick the photographer from WGAL. At the time, it was fun and seemed to go well, but we won’t really know how it went until it airs next week, either Tues. Wed or Thurs. I will try and post the date/time asap. 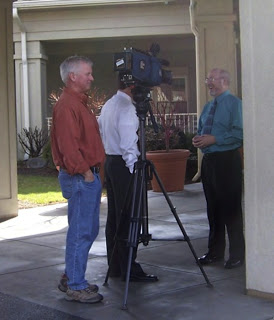 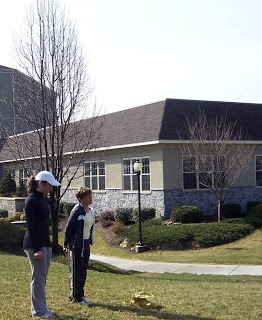 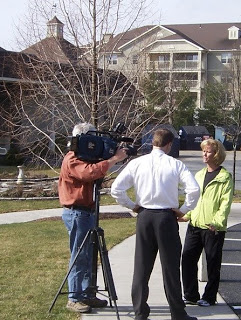 Carolyn and Linda watching Loretta’s interview.
Jere interviewed Linda, Loretta and I – but I only got pics of Loretta’s interview. It should be a good overview of running because Linda has been running for years and done numerous races – Loretta’s a new runner (Jan. 3, 09) and I was a runner for 10 years, got hurt and am now back to running 5 years later.
After the interviews, we went out for a training run and Jere and Rick followed and/or were up ahead filming. It was a tough run – for filming, it worked best if we ran together as a group, which we aren’t used to doing. At running club, we might start together, but then we usually end up in groups of only 2 or 3. The others were so kind and ran slower than normal and I ran faster than I normally do. Along with that, it felt odd having a camera on us.
I ran/walked about 4.5 miles – so that will be my last long training run. I will do a few 2 or 3 mile runs and then take some rest days so my legs are ready for 4. 6 miles next Saturday.
Newscast shown on WGAL later that week.